The Logic Analyzer application enables the representation of the binary states of digital signals. The Logic Analyzer can both deal with purely binary signals, such as the GPIO outputs of the Raspberry Pi or Arduino board, as well as analyze different bus protocols (I2C, SPI, and UART) and decode the transmitted data. All Red Pitaya applications are web-based and do not require the installation of any native software. Users can access them via a web browser using their smartphone, tablet or a PC running any popular operating system (Mac, Linux, Windows, Android, and iOS). 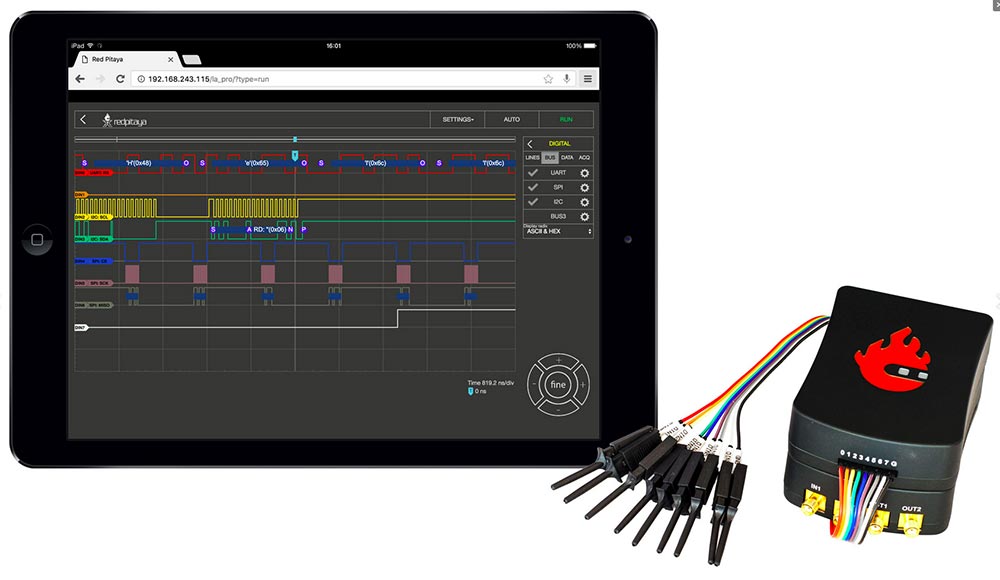 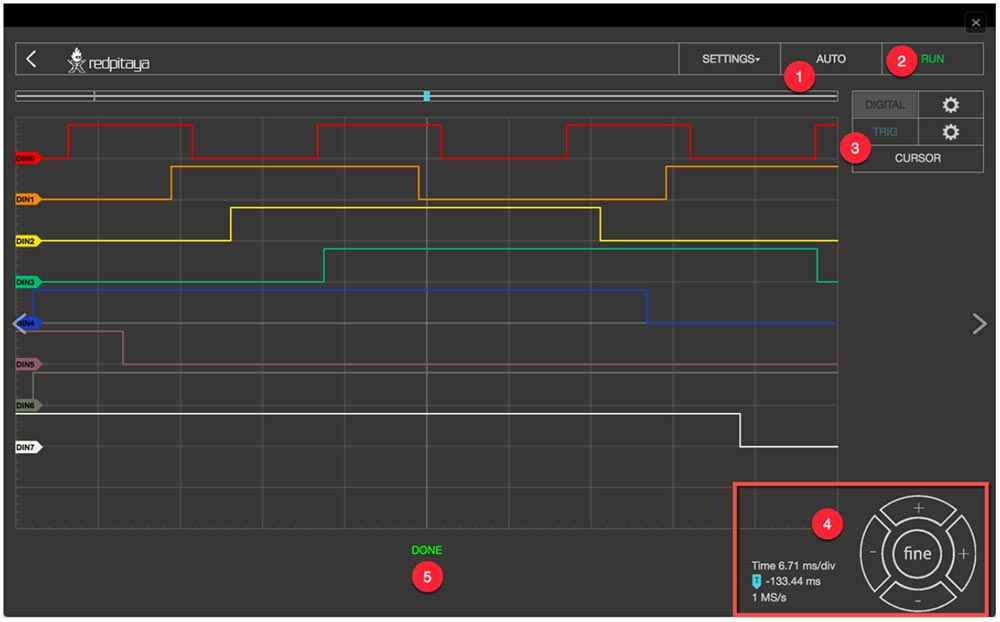 Apart from the actual graph, there are again five key areas/elements into which the surface is divided:

Further hardware and connections can be used in addition to the Logic Analyzer application for maximum performance and protection of your STEMLab board. Using the LA extension module is straightforward, just plug it into your STEMLab and connect the leads to the desired measurement points. 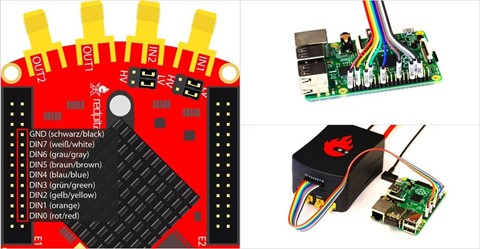 Note: Directly using the GPIO expansion connector E1 pins of the Red Pitaya board only works with the STEMlab 125-10!

By selecting the gear button behind the DIGITAL selection field you enter the menu for the channel configuration. In the LINES register, the channels can be activated or deactivated by simply clicking the check mark. As long as no bus systems have been configured, the channels operate as purely digital inputs and show the corresponding progress. The tab ACQ opens the selection field for the sample rate settings. When selecting the values there is one thing to note: the sample rate has a significant influence on the time section, which can be represented. The memory depth of the Logic Analyzer applications is 1 MS, so it can store and display 1,000,000 binary values. From this it is clear that the sampling rate determines how many values are recorded per second. If we choose the highest sampling rate (125MS/s), 125,000,000 values would be recorded per second. Since 1,000,000 values can be stored is the time memory, we get a 0.008 second time window. With a sampling rate of 1MS/s, the time window of the recorded signal will be one full second.

A pre-sample data buffer value can be set with regard to the point in the recording where the trigger event is located. This makes particular sense if you want to find out what happened before the defined trigger event. To illustrate with an example: the sample rate is set at 4MS / s, the stored time segment thus amounts to approximately 0.25s = 250ms. If the pre-sample data buffer is set to 10ms, then the recorded signal shows what has happened 10ms before the event, and 240ms after the event. 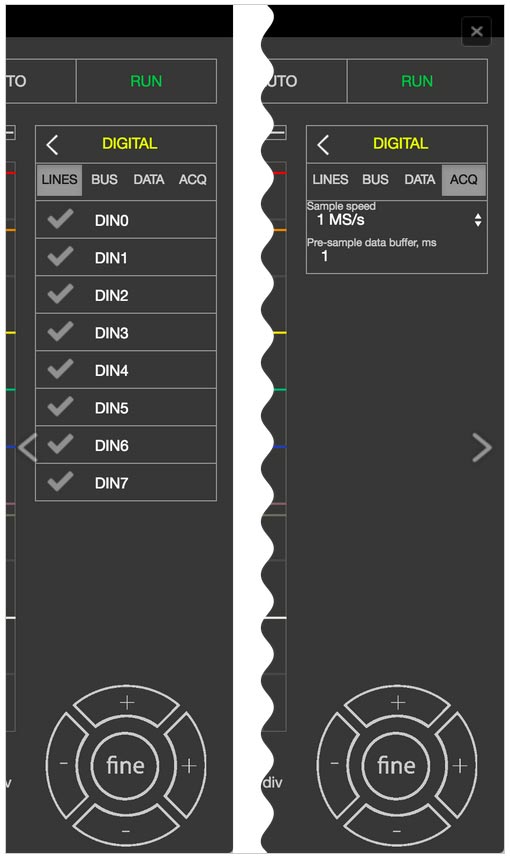 By clicking the gear behind TRIG settings, the trigger menu is opened. Each channel can be set as a trigger source with the desired condition. For acquisition to start, the Trigger source and Rising Edge need to be defined.

The possible criteria for a Trigger event are as follows:

By clicking the RUN button the recording is started. The status display informs you whether the process is still running (WAITING) or has already been completed (DONE). After finishing the acquisition, the results are displayed in a graph. Additional trigger options LOW and HIGH are used for the so-called Patterned triggering. For example: if you set the trigger source to be DIN0 – Rising edge (to have one channel defined as a trigger source with a rising or falling edge is a mandatory condition for the acquisition to start), DIN1 to HIGH and DIN2 to LOW, this will cause such a behavior that the application logic analyzer will wait for the state where DIN0 goes from 0 to 1, DIN1 is 1 and DIN2 is 0 to start the acquisition.

In the DIGITAL → BUS menu the decoding of the desired lines can be selected. Up to four buses can be defined. The available decoding protocols are I2C, UART, and SPI. By selecting the desired protocol, the setting menu for the selected protocol is opened.

Two options are possible for the display of the decoded data: firstly, the data is placed as a separate layer in the graph directly on the signal. Secondly, using the DIGITAL → DATA menu where the decoded data are represented in a table format. You can select ASCII, DEC, BIN and HEX data formatting. With the EXPORT button the decoded data can be packed into a CSV file. This then ends up directly in the download folder and can be used for further analysis. 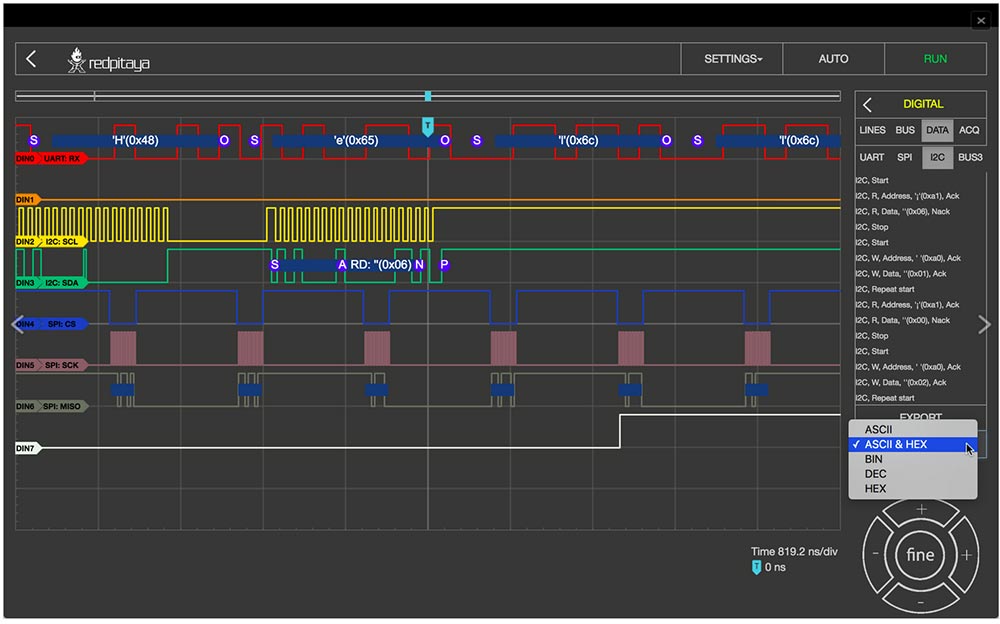 As with the Oscilloscope the Logic Analyze application also provides CURSORS for quick measurements. Because there are no variable amplitude readings but only discrete signal levels, the cursors are available exclusively for the X-axis. When enabled, the cursors will show the time relative to the zero point (trigger event) and the difference between the two. 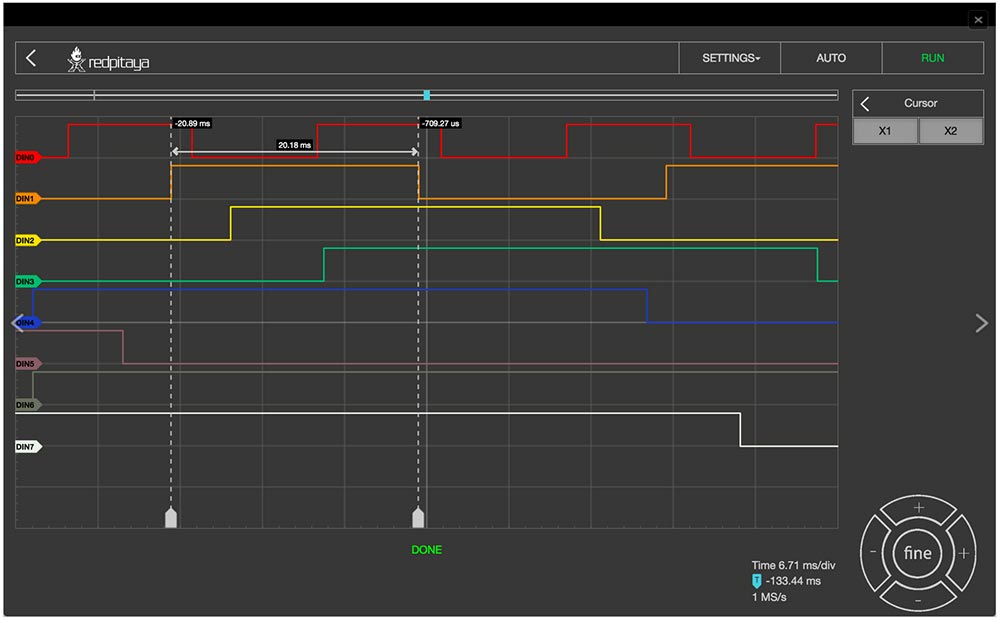 The platform software is Open Source and available on Github. Device functionalities and data can be accessed through Matlab, Labview, Scilab and Python API’s.

Control STEMlab with LabVIEW - software designed for the fast development of any engineering application that requires test, measurement, or control.

Control your Red Pitaya with MATLAB - the easiest and most productive software environment for engineers and scientists. Perfect combination to speed up your research, prototyping and testing.

Our team constantly works on enriching our information base which makes your experience with Red Pitaya better. Check out the documentation, teaching materials and case studies and start your Red Pitaya journey!

Find the information about getting started, more about applications and the developer's guide here.

Check out what epic projects have already been done with Red Pitaya.

You can find out more about which cookies we are using or switch them off in settings.

This website uses cookies so that we can provide you with the best user experience possible. Cookie information is stored in your browser and performs functions such as recognising you when you return to our website and helping our team to understand which sections of the website you find most interesting and useful.

Strictly Necessary Cookie should be enabled at all times so that we can save your preferences for cookie settings.

If you disable this cookie, we will not be able to save your preferences. This means that every time you visit this website you will need to enable or disable cookies again.

This website uses Google Analytics to collect anonymous information such as the number of visitors to the site, and the most popular pages.

Please enable Strictly Necessary Cookies first so that we can save your preferences!